This post first appeared on Savory Experiments where I am a contributor.

Although I am a huge fan of using scratch recipes for most of my cakes, I chose to use a doctored cake mix for this Banana Pudding Cake. The consistency of a boxed cake mix pairs so great with the banana pudding and creates a fluffy, delicious cake.

The traditional banana pudding dessert includes whipped cream, however I wanted to do something that was a little more stable than whipped cream for this layered cake. I decided to go with a whipped cream cheese frosting and it did NOT disappoint.

My family, in particular my sister, LOVES my cream cheese frosting. She will literally eat it with a spoon..

So I added a few things to my original recipe to give it a more “whipped” texture which paired perfectly with this cake.

HOW TO MAKE A BANANA PUDDING CAKE

To Make The Cake

This cake is best after it has set for a while to let the flavors “marry”-as my grandmother loved to say. My recommendation would be to prepare the cake the day before you plan to serve it and leave off the crushed Nilla wafers until you are ready to serve.

Store the cake in an air tight container to keep the cake from drying out.

If you love this Banana Pudding Cake as much as I do make sure you share it with your friends on Facebook and Pinterest so they can try it too! 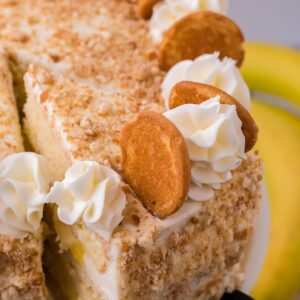 I am the sweet-o-holic behind Baking up Memories. I am a mom, wife, food photographer, recipe developer, and blogger. I love creating easy and delicious desserts that anyone can create! Baking doesn't have to be hard, just taste good!!

RECIPES I AM LOVING!