These German Chocolate Cupcakes aren’t just pretty to look at, but they taste amazing too! The ingredient list looks long, but don’t be intimidated, most of the ingredients are kitchen staples and reused in each layer.

This post first appeared on Savory Experiments where I’m a contributor.

Why Are They Called German Chocolate Cupcakes?

How did German Chocolate Cupcakes get their name? Believe it or not, it isn’t because they came from Germany. The unique flavor combination was developed by American Sam German.

German worked for the Baker’s Chocolate Company and made the iconic cake with whipped frosting, chocolate syrup, and flaked coconut. It gained popularity when it was published in the Dallas Morning Star in the 1950s.

How To Make The German Chocolate Cake

Add the flour, sugar, cocoa powder, baking soda, baking powder, salt, and espresso powder into the bowl of a stand mixer equipped with a whisk attachment. Whisk until all ingredients are combined.

Add the milk, vegetable oil, egg, and vanilla extract into the dry ingredients and mix until there are no dry spots. Do not overmix.

Carefully pour in the boiling water and start mixing at a low speed. Slowly increase the speed to high and continue mixing for 1 minute.

Evenly divide the batter between 18 cupcake liners and bake at 350°F for 15-16 minutes or until a toothpick inserted in the center of the cupcakes comes out clean.

Allow to cool for 5 minutes in the pan then remove to a wire rack to cool completely.

How To Make The Coconut Pecan Filling

Remove from heat and stir in the vanilla, pecans, and shredded coconut.

Cover and cool in the refrigerator.

Add the softened butter into the bowl of a stand mixer equipped with a paddle attachment and cream for 2-3 minutes until smooth.

Scrape the sides and bottom of the bowl and add in vanilla extract and mix well.

Add in cocoa powder and mix until there are no dry spots.

Add the powdered sugar one cup at a time and fully combine after each addition. Scrape the sides and bottom of the bowl and mix until well combined.

Pour in the heavy cream and start mixing on low speed and increase to high for 2-3 minutes or until you get a “whipped” consistency.

Add to a piping bag with a large star tip.

How To Assemble The Cupcakes

Fill the center of the cupcake. Add the coconut pecan filling.

Add the cake back. Place the top of the cake piece that you removed back onto the cupcake.

Frost the top. Pipe a generous amount of frosting in a swirl on top of the cupcake.

Add a little extra. Finish each cupcake by drizzling with chocolate syrup and top with pecan pieces and shredded coconut.

How To Keep Your German Chocolate Cupcakes Fresh

To store your cupcakes, put them into an air tight container and store in the refrigerator until you are ready to serve.

Be sure to remove the cupcakes from the refrigerator about 45 minutes to an hour before you plan on eating them so they can come to room temperature.

Make the filling ahead. Just make it according to the directions and just store it in the refrigerator covered until you are ready to use it.

Improvise. If you do not have a piping bag, that’s ok! Just use a large Ziplock bag and cut off the corner and use that to pipe your frosting onto your German Chocolate Cupcakes.

Use a box cake mix. If you're short on time and absolutely have to have German Chocolate Cupcakes (Hey, sometimes cravings hit) use a chocolate cake mix. It won't be quite as delicious as using the homemade cake recipe, but it will still taste great.

If you love this recipe for German Chocolate Cupcakes as much as I do, make sure you share it with your friends on Facebook and Pinterest so they can make them too! 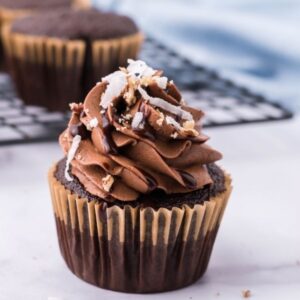 Welcome my dessert-loving friends! I'm Lisa! Here you will find deliciously decadent dessert recipes for the home bakers! Easy, tried & true mouthwatering desserts everyone will love! From my home to yours…Happy baking!